I am thankful for all of the people who insisted we go to SIBS.

My name is Jennifer and I would like to introduce myself and my beautiful family. Hopefully behind me is a picture of my amazing husband, Christopher, and the cutest, most special little boy, Andrew.

The bigger, handsome guy behind me is my world. Because of him, I am privileged to be the mother of the smaller version. On March 22, 2016, we learned that Chris had a mass on his right kidney. In the days and weeks after, we were immersed in a world of Renal Cell Carcinoma, a place that we’d never thought we would find ourselves. Two weeks later Chris was minus a kidney, we were full of hope, and I was introduced to SIBS. A colleague told me that she knew someone who went there and that it was so beneficial to the children. Of course we didn’t pursue SIBS because all was well, and we were assured Chris was cancer free. 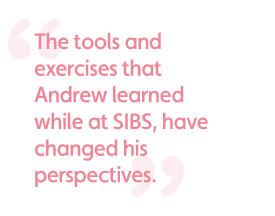 Five short months later, we were terminal. I say “WE” because cancer only physically manifests in one family member, but everyone suffers. I remember Chris saying “TERMINAL” to me. The only thing I remember following that statement was laying on the floor and sobbing. Typically I am a very strong person—But that night, I was frightened for Christopher, but mostly frightened for Andrew. Our dear, sweet Andrew…A week later I asked the school social worker to help us with Andrew. His teachers always referred to him as “joyful”, and it was important for us to ensure that he remained a happy child. She immediately told us about SIBS. And there it was again—I knew I needed to call.

I still remember the feeling I had that day. I placed the call and it was like watching someone else speaking on the phone. MY HUSBAND IS TERMINAL. I said it again, and it tore another hole in my heart. The kind, compassionate voice on the other end of the phone told us to come in. When we arrived that first evening, Andrew was welcomed into the room. The entire ride home in the car, he told us that he wanted to go back there every single day. When we brought Andrew back for his second visit to SIBS, one child threw her hands in the air and said, “Yeah, Andrew is here!” And I knew in my heart, in that moment, that Andrew would be safe, and happy, and everything we feared about his emotional health was forgotten.

SIBS is really a place for the entire family, so I would be remiss if I didn’t mention how the parent group helped Christopher process what he was going to experience, yet how his story was different from others…these side effects are normal, expect “this” when going to the doctor, try eating this…it helped to hear from other people and their experiences, but mostly, it helped to BE WITH other people who understood and could encourage.

Although Chris was getting sicker, I gave him the option of coming to group with me one afternoon. I wanted him to be with people who would help him still feel alive. I told him he could say no or we could go back home after dropping off Andrew. He decided to stay. As we waited in the car for an hour for group to start, he told me that he was sure this would be his last time and that he wanted to say good-bye to everyone. I couldn’t believe what he was saying.

Chris became our angel on the last day of February of this year. As I stated earlier, our primary concern has always been Andrew’s mental and physical well- being, and I’m thankful for SIBS for helping us with this. Typically what the young folk do at SIBS stays beyond “the door”. Sure, we see the pretty lava lamps and art projects, but I’m the mother of a six year old. The question, “what did you do today?” is typically followed with “I don’t know” or “stuff”. 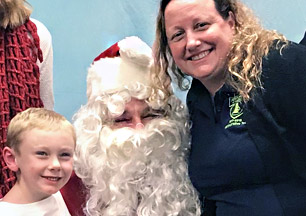 Every Tuesday and Thursday is a given in our house. If plans arise on either of those two days, Andrew immediately declines and cites his participation at SIBS. When I arrive to pick Andrew up from after school and shuttle him over to SIBS, he is uncharacteristically prompt and demonstrates the ability to quickly get into the car and follow directions—also very uncharacteristic of my six year old. The entire ride is filled with conversation about showing his friends the latest Pokemon, or dancing with them, or talking to his “newest” friend who knows exactly how he is feeling following the loss of his father. The tools and exercises that Andrew learned while at SIBS, have changed his perspectives.

The morning after Christopher passed away, I had the worst conversation of my life. I had to look my beautiful son in his big blue eyes and tell him that his role model, his hero, his amazing father died last night. As I sobbed uncontrollably, my baby cried with me. After a minute, he stopped and wiped his tears. He put his hands on both sides of my face and said, “Mama, don’t cry. Daddy loves you so much. Just think of the happy memories.” And in that moment, I KNEW what went on behind the door at SIBS when we have parent group.

In the days following Chris’ passing, I continued to mourn and cry for the scary road that lay ahead for me and Andrew. The morning of Chris’ wake, I was inconsolable. Andrew woke up and suggested that we start a memory book and a time capsule to keep all of our good memories in a safe place. Here was my wonderful boy making sure that his Daddy would be remembered for the fun times, and not the suffering that he endured in the past five months.

I am thankful for all of the people who insisted we go to SIBS—for all of the Tuesday and Thursday nights that we hustled Andrew over to SIBS after a long, hard day at work, for all of the wonderful people who work their magic behind “the door”, but mostly for the tools that Andrew learned in a few short months.